Provincial and a Murky Day in Pompey 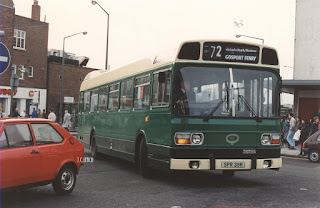 Portsmouth lost it's municipal buses for minibuses, Southdown became a Stagecoach stripe but on the plus side long established Provincial from nearby Gosport became a familiar sight. It was a pity though that they mainly ran Leyland Nationals but at least they still wore their traditional colours and looked quite pleasing on a nice day!
Posted by christopher at 03:37