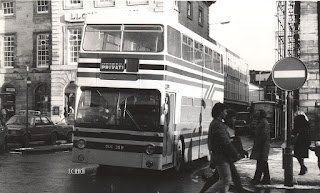 Independent's like Happy Days of Woodseaves went through a lot of vehicles some of which stayed so long they have become part of our memory, but in the years around Deregulation things were far less settled and buses came and went so quickly sometimes they didn't get a repaint. Once stalwarts of the old pre-70's G.H.Austin bus services Leylands returned in the Eighties for bus and contract work and used Leopards became a feature in later years but a single former Glasgow Atlantean was so difficult to start in the morning it guaranteed Fleetlines like this Former London DMS would become the double-deck choice. Former DMS 2035 showing 'Private' emerges from deep winter shadow and catches a bit of thin sunlight on a chilly day in Stafford with snow and ice underfoot whilst another Happy Days vehicle, this time a Ford follows it on service.
Posted by christopher at 16:11