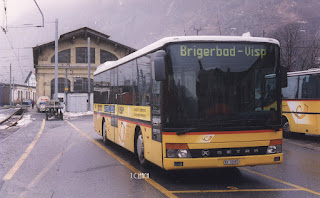 Switzerland when bathed in sunshine has a magical quality and even the railway system with it's old wooden stations and it's period industrial concrete sheds has a toy-town fairy-tale feel about it. Perhaps that's because it's still the way I remember it from my schooldays in the Sixties. But go there when they get some British weather with dense cloud and rain and it seems like an old-fashioned dump. So yes of course they get horrid weather here too but when in winter it was bad I used to take the train up into the mountains for I could live with the alpine snow outside the window. Usually after a lousy week the last two days were just perfect and I ended up not wanting to come home. As well as being a well know pont on the rail route from Geneva to Milan the town of Brig has a Die Post bus fleet which always interested me but this Setra which looked very much the same was actually owned by one of it's many contractors.
Posted by christopher at 03:41

I wish the Swiss would stop putting concrete slab monstrosities of buildings slap bang in the middle of gorgeous views. Sometimes I get the feeling they no longer care for their country at all.

Mind you, the last time I travelled around there were so many trees growing alongside the railway lines that you couldn't see the scenery anyway. :(

Ross, I guess the Swiss don't see the landscape the same way as tourists do and even if they tried to put a beautiful wagon shed there it would still be an eyesore. I'm afraid as in Britain there are many old villages which have been swamped by and ruined by development. However there is one Swiss Canton which is like a national park with only traditional Swiss Chalet type dwellings and things like visible sat-dishes are banned.