Looking for Red in Bridgnoth 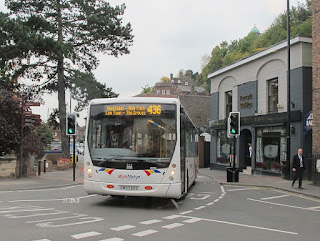 In Midland Red days Bridgnorth was a bit special for even though it was not particularly busy with departures it was served by no less than five of the companies bus garages and even had two town services. Buses moved between garages quite frequently but it would not be the place to try to see everything as a spotter for they were only single-deckers. A more important place on the system that had no garage for most of it's history was Coventry and I counted at least eleven garages that served the city on bus routes some of which were quite long and of course it included double-deckers. Back in Bridgnorth the  local undertaker peers out as an ugly Plaxton Centro bodied Volvo B7RLE of Bryn Melyn passes through Low Town on what would have been local Midland Red workings years ago.
Posted by christopher at 16:34