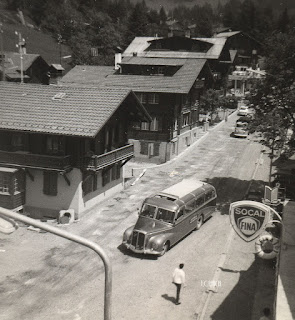 BVB used to run trams down from Villars to it's adjoining village of Chesieres about a kilometer away but this was discontinued probably when the new road bridge was built between it and Villars in the early Sixties. A replacement bus service was operated using a rather functional looking faded old blue Saurer but sometimes a rather stylish green coach was used instead and both were housed at the former tram shed in the village. Not a brilliant print I know but as a schoolboy I had to rely on my point and shoot Ilford Sporti with it's awkward for buses square negatives.
Posted by christopher at 16:08