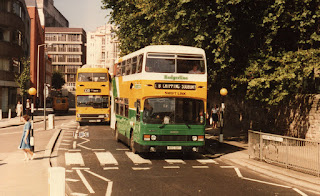 Bristol Omnibus like London Country took the Roe bodied version instead of the more usual ECW body and they were easy to distinguish especially as the had windscreens first seen on the LCBS Green Line RP class. Also unusual within the NBC had been Metrobuses but Bristol had a few at Bath which it used here on the Bristol service and one of each can be seen in the more colourful Badgerline era.
Posted by christopher at 02:28