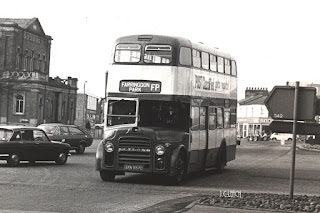 Just like Ribble having Leyland Motors on it's doorstep, it encouraged  Preston Corporation as well to remain a loyal customer for it's bus products. Another thing they had in common was sharing the town's registration letters as seen on this MCW bodied PD3 approaching the bus station in 1979. Unlike the one's allocated to Ribble these didn't match the fleet numbers 69-73 ARN 654C-658.  The combined Ribble group with a fleet of 1275 of course took a lot more buses and coaches in 1965 than Preston with a fleet of just 95. They had some CCK's too 608-627C but most were ARN's:- 568C-607C, 861-866C, 775-817C. All were Leopards apart from Lowlanders 1861-6.
Posted by christopher at 08:23