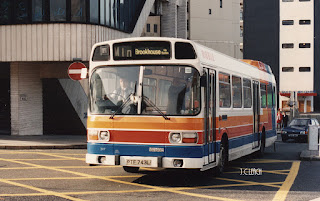 I'm sure I saw many Leyland Nationals in those notorious Stagecoach stripes but any familiarity has diminished because I find it hard to picture them in anything except NBC leaf-green or like this Ribble example which once wore poppy-red. Slightly unusual on NBC examples was the additional centre exit sometimes found on earlier ones like this and locally in the North West with Crosville too. some too. Still carrying Ribble branding and fleet number was No.387 seen in Manchester.
Posted by christopher at 07:23