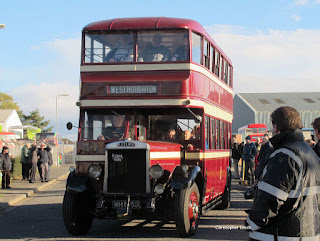 Now Easter is out of the way we can look forwards to another bus rally season so the enthusiasts will soon be polishing their steads and pumping up tyres. I'm a bit fickle as to where I go as I get bored quite easily and at the end of the day they are just buses parked in a field but now that I've officially stopped collecting diecasts the list is going to get even smaller. I don't do static events anyway and so I like plenty of rides which also give me access to the nearby town and the Lincoln museum events are ideal for that. I never made it to Malta for the bus experience but as a nipper I did go to Jersey with my mother which must have been just as good and so my formative memories include seeing about three very similar buses with JMT. This Leyland TD1 is a former Bolton bus dating to 1929. I wasn't old enough to go out spotting then but they fascinated all the same and it's just a pity I wasn't old enough the appreciate that amazing fleet.
Posted by christopher at 03:07