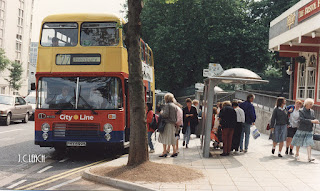 One of the nice things about going down to the West Country by coach was there was usually a decent enough break at Bristol and Marlborough Street Bus Station was situated in such a way that there were a number of good spots to take photographs nearby. Red yellow and blue together were popular colours employed on a number of former NBC fleet including the Bristol City Line fleet where it's brightening effect was almost 'springlike' compared to that drab old leaf-green and white. A Muller Road VR pick up a good load on it's way to Henbury.
Posted by christopher at 02:48