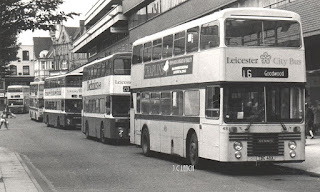 They are now a rare sight in some towns but in the Eighties the double-decker was still very much a force to be reckoned with. An East-Lancs bodied Dennis Dominator still in the much more subtle and pleasant traditional Leicester livery is followed by two similar buses whilst another cream and maroon bus brings up the rear. It's an MCW Metropolitan and we can also see a former London DMS with Midland Red East or more likely re-named Midland Fox by then.
Posted by christopher at 02:37