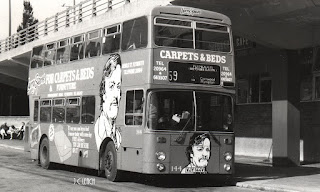 An ego as big as a bus even I'm not that bad lol. But I can imagine furnishing seller Larry Speare not being happy with the look of his image on the bus and then tells the sign writer to start again. I'm not keen on all-over advertising such as on this Plymouth East-Lancs bodied Leyland Atlantean at Bretonside but what I hate the most is as a passenger when the design partly obscures the window I want to see through and there would be added irony if it said "See Britain by Bus". One thing is for sure I expect Larry has not only changed a bit since since the early Eighties but his fashion tastes have moved on. I wonder if he wore platform-heels if not the registration number at the front would be almost in line with his moustache.

Posted by christopher at 02:22