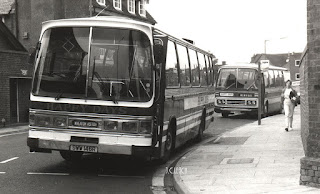 When G.H.Austin of Woodseaves went bust in 1969 it got rid of all it's elderly second-hand Leyland Tiger Cub buses and a new company took the name of it's coach business Happy Days but little else changed much except the fleet went over to newer and even new Fords. But by the mid-Eighties things were starting to change with the arrival of a Leyland again this time a former Wallace Arnold Leyland Leopard. No doubt as elsewhere demanding motorway running dictated heavier premium motors and more similarly bodied former Wallace Arnold coaches arrived but this time Volvo B10M's. But a lot more Leopards found their way into the fleet and by the time they sold out to Midland Red North it was a bit like Austin's again with elderly Leylands doing much of the bus services out towards Shropshire along with a pair of Scanias bought new..
Posted by christopher at 02:40