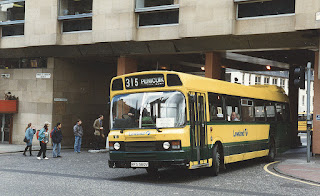 As with the NBC the Scottish Bus Group was also broken up to be sold off by the Tories who believed public ownership was a sin burdened with trade unuions, workers rights, and a strange concept that one gave a service not just to make money. The part of Eastern Scottish which became Lowland drew a short straw when it came to viable operating territory but at least had an attractive livery as seen on this Leyland National2 in Edinburgh.
Posted by christopher at 02:33