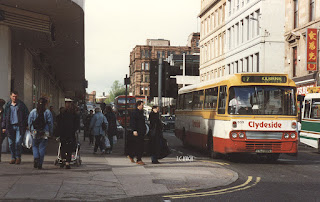 I think most of the other Scottish Bus Group fleets were more interesting quirky and probably more attractive too but I still think Western Scottish was my favorite as in both livery and area diversity and size it was a bit like their Ribble over the border. So I thought it was a pity when it's sprawling empire was split up and here in a busy Glasgow one of it's many Leyland Leopard Alexander Y-types operates under Clydside ownership on a service to Kilbirnie. A Scottish destination one could not imagine on a Ribble bus excepting of course after Deregulation as anything was possible then .
Posted by christopher at 02:33