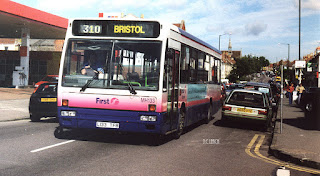 Perhaps the worst livery ever from the major groups was Barbi2 often not helped by it's hurried application which blanked out any cheerful brightwork including badges which make a bus look loved. As part of the First Group Midland Red West bought a fleet of Plaxton bodied  Dennis Lances but this example later moved on to Badgerline at Bristol where it was seen heading down the Gloucester Road in the golden tinted autumn sunshine.
Posted by christopher at 02:17

Actually this one was new to Badgerline - the registration gives a clue. The Dennis Lance/Plaxton Verde was briefly a Badgerline standard before Firstgroup - others went to the Yorkshire Rider fleet.

Thanks, yes another mental blip on my part, it's just that MRW had so many and even some M-MRW.