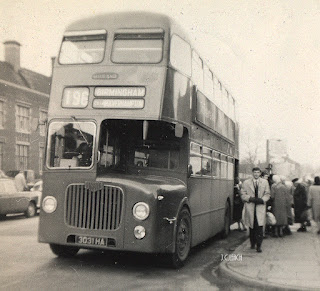 To think except for during the war there must have been a continuous direct bus service between Stafford and Wolverhapton.  But today that comes to an end as it's i54 sponsored National Express West Midlands 54 Service will cease to operate and Staffordshire County Council failed to make other arrangements. I think it's a step too far and dangerous when important trunk networks get broken up, also they don't do things by degrees any more as at least they could have left the people who use it a few buses. Anyway in the good old days it was served by Midland Red every hour and D9's were used on it for some time before Stafford got any and especially as Bearwood got the third production bus 4851. By 1963 though they were a familiar sight and a later Bearwood bus had had plenty of time to get grubby as it set off back on it's fairly slow two hour trip to Birmingham.
Posted by christopher at 04:36

In all honesty I don't see why Staffs CC should be expected to step into this one.
The 876 (76) was a commercial service until the i54 mob stuck their oar in and paid NXWM to run the 54 through to Stafford (and the 154 to Cannock), the subsidised service destroying the viability of the commercial 76 in the process.
(Worth noting that it's against the law for a council to subsidise a service which competes directly with a commercial service, so it would have been illegal for Staffs CC or TfWM/NWM to fund the 54 in this way).

NXWM have, unsurprisingly, buggered off immediately the payments by i54 stopped.

The villain of the peace here is i54, and it's them who should be funding the replacement service for the route their intervention destroyed. They won't, of course, because there's no legal requirement for them to do so.

The losers are, as always, the (few) through passengers who would have crossed Penkridge on the 76, and since most of those will have been concessionary passholders they'll just be told use the 75 and the 878 instead.

Birmingham to Kidderminster can still easily be reached by the 9/192 which under normal circumstances I use regularly whilst Birmingham to Eveshan is still served by 146/247 all which operate regularly Monday to Saturday.

I heard at the time that Arriva had been offered the i54 contract, turned it down not thinking West Midlands would take it up. Their nose was put out of joint somewhat but the standard of service on the 76 was pretty awful on a Saturday at least as it was always late leaving having had not enough time to get in from Cannock and then if nobody wanted to get off they just skipped going to Brewood altogether to save time. West Midlands on the other hand was pretty good except when one of the Enviros broke-down.

ClentBoy rightly notes that Birmingham-Kiddy and Birmingham-Evesham are still possible, but both require a change of services (and in the case of Kiddy, a change of operator with the extra cost that implies for those without concessionary passes).

My point was that none of the journeys I listed have through bus services anymore, not that the journeys couldn't be made at all.

One of my favourite trips out from Brum back in the 1980s was to ride the X92 to Hereford via Ludlow, often coming back via Worcester. To replicate that trip to Hereford today you would have to use NXWM's 9, Diamond's 192 then 292 and Lugg Valley (Yeomans) 490/492 (through bus). Three operators is a slight improvement for paying passengers as until recently each service had a different operator, whereas now at least Diamond's day ticket is a little cheaper than buying singles.

Coming back via Worcester might be difficult afterwards as the 420 is now a shadow of its former self, with DRM struggling to keep the service viable, and coming back via Ludlow might not be very easy either. So it's the train back, and if you're going to do that then you might as well go by train both ways given that the off-peak day return fare is only 10p more than the single!

It is also possible to travel from Birmgham to Hereford on certain days of the week using Service 144 from Birmingham to Worcester and 44/675 or 417 to Malvern & Ledbury and then using First Midland Reds Herefordshire County Council contact services to Hereford on a FirstDay ticket.