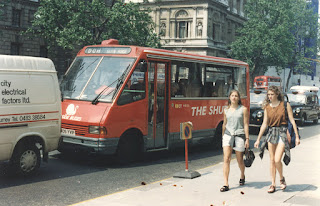 This is a slightly strange photo I took. As usual I was hoping to get the girls in as an excuse to snap the very ugly Leaside Metrorider. I don't know if the driver was just too ashamed to be seen driving it as he pulled up as closer behind the transit in Whitehall than usual in traffic. He also seems to be waving his arms around in protest but I didn't notice anything too much at the time and at least the red is not my blood on te pavement. It might be flawed but here's another example of the way I managed to record those buses most wouldn't bother with which only goes to prove it pays to participate in two hobbies at the same time.
Posted by christopher at 01:40