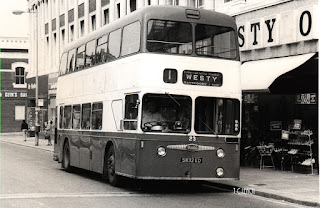 Perhaps with the exception of the rather elegant but very traditional looking Northern Counties bodies also seen in Warrington with Lancashire United early rear-engined bodywork on the double-decker didn't amount to much in looks. Like all the Lancashire bodybuilders East-Lancs could produce a fine looking half-cab bus but struggled here. It was not helped by the badly placed Daimler scroll but when on later buses a curved windscreen and front was added the design came together and was much more attractive and certainly different. The batch  was18-26 5827-5835 ED and no they couldn't even quite get the registration numbers to match either which also confuses the senses lol. No a bit of an ugly duckling then which is a bit surprising as by 1963 when these arrived Alexander of Falkirk was starting to build it's modern  timeless classic with fibre-glass and of course Ralph Bennett was prodding the design team at East-Lancs to do something a lot more exciting with this body and also took the much more striking Liverpool style customised standard MCW body.
Posted by christopher at 02:11