Taking a National Holiday in Chester 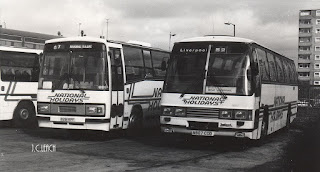 Most Duple designs looked quite different from their rival Plaxton and this Southdown Laser bodied Tiger makes a good contract alongside another Leyland but this time with the more common Plaxton Paramount belonging to London Country. Both were in NBC  National Holidays and seen whilst on tour in Chester. I must admit I like a bit of brightwork trim and I prefered these earlier Lasers to the later less cheerful tidied up version. In the early days of the NBC it was horrible seeing the beautiful traditional coaches of Maidstone and District, Ribble and Midland Red etc. being outshopped in this uninspiring white garb but I think it was largely in our heads as it was far less noticeable on later coaches that came painted white from new.
Posted by christopher at 04:43