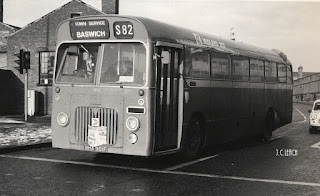 Here we have a Midland Red BMMO S22 at the reaffic lights on Gaol Road in Stafford. It was a day very much like this one with dense shadow and thin sunlight which is one of the worst combinations for black and white photographs unless one picks exactly the right spot. 5901 wasn't at Stafford garage for long being allocated here between May 79 and May 80. It went onto Leamington to do another four months before withdrawal but travelled quite a bit throughout the system spending most of it's working life from July 1968 at Worcester till January 1979 where it did a short four-month spell at Hinckley before coming here. It was later preserved.
Posted by christopher at 07:51