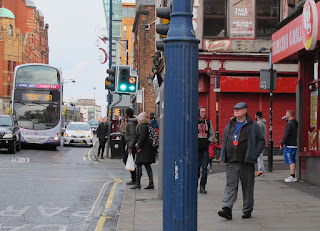 It's much busier than it used to be but I'm glad not all of central Manchester has been redeveloped like this gritty area of small businesses around Shudhill and Withy Grove. There used to be an open-air second-hand record stall down here too in my day where I picked up some rarities. Buses too seem to becoming a rarity in many parts of Britain especially on a Sunday but not in the big Metropolitan Boroughs like Greater Manchester and here a First Wright bodied Volvo double-decker tries to edge it's way passed an illegally parked car with it's hazards on. Not such a rarity!
Posted by christopher at 05:16