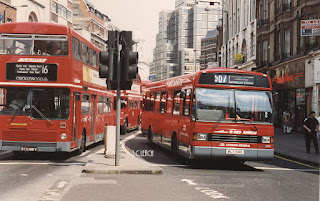 With so much uncertainty in the bus industry during the period just before and just after Deregulation operators were forced to use their money wisely, and as well as this resulting in a plague of low-cost minibuses operators tried to get optimum returns from their stock and with a swing away from coachwork and especially as many of them had poor quality bodywork rebodying as buses became quite commonplace. As well as that East Lancs introduced the Greenway as a way of both extending the life of elderly Nationals and a means to make them more operator friendly. Often after conversion they reappeared somewhere else but London Buses had it's Red Arrow National2's rebuilt as Greenways and returned to their normal duties such as this one at Victoria which had gained the registration number off RM 696.
Posted by christopher at 02:27