I Might Not Look It But I Am The Number One: N201 UHH Stagecoach Cumberland 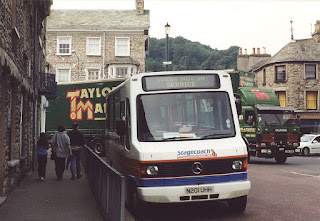 It must go back to my spotting days but I'm still attracted to bus numbers and registrations and Stagecoach Cumberland number-one was too tempting despite being a minibus. I quite like the Mercs and another thing that attracted me was it still had it's badge another of my requirements lol. Despite all the bus trivia it is still a nice interesting photo as in the background a massive Taylor Martley Scania artic squeezes it's way through Kendal's narrow streets, th norm before the M6 was built.
Posted by christopher at 02:23