Are You a Seddon RU? Yes Darlington had some like this 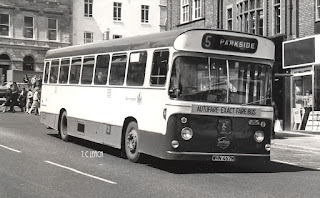 Standardisation with a very basic livery was very much the order of the day within the NBC Empire so it was very dull compared to what came before it, but those Municipals that didn't get drawn into the PTE's continued to provide a bit more interest. The Corporations traditionally used to usually operate mostly double-deckers but  with the advent of driver only buses they saw a rapid decline during the Seventies. This left Darlington to see in the Eighties with a just a few elderly  Roe bodied Daimler half-cabs, but the now mostly single-deck fleet  was varied and interesting and it included these not too common Pennine bodied Seddon RU buses. This photo was taken in 1980.
Posted by christopher at 08:28