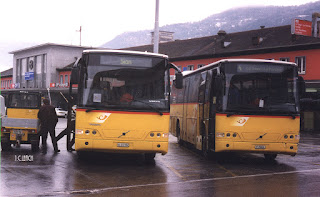 Doing a check I was surprised there are no photos on here from Sion in Switzerland, a town I visited often and with the exception of Lugano it is the busiest post bus departure point in the country. When I was last there in 1999 or 2000 these Volvos were very much the choice here and two identical buses stand side by side, one can't tell them apart any more but the one with the P-Reg shows it was owned by La Poste as there is a garage here. It was unusual to see a dirty post bus but P25626 had some  uncharacteristic accident damage which probably wasn't that surprising with often difficult conditions  higher up above the snow-line.
Posted by christopher at 07:03