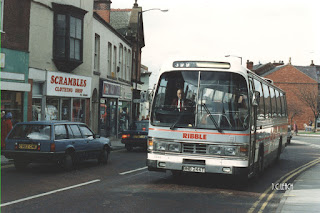 Places in Cheshire like Alderley Edge and Knutsford might have been affordable to  wealthy stockbrokers and the top footballers but to the north of Manchester was Heywood which was Just far enough away outside to make it popular with the cast of Coronation Street etc. where they should have felt very much at home as it had that friendly Lancashire feel even to seeing the odd Ribble bus on the 399. I might be wrong but I think this service went to Rochdale from Bolton but when I was there in the Eighties it was being operated with these Duple bodied Leopards like No.1244 looking quite attractive in one of NBC's local 'blind effect'  liveries introduced prior to Deregulation when it would all be sold off.
Posted by christopher at 01:26