D649 NOD Portsmouth: Too Many Noddy's To Nod 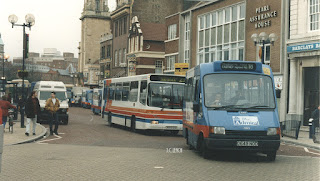 Harry Blundred's empire included Portsmouth where typically large numbers of Ford Transit minibuses could be found plying their trade as he took over City of Portsmouth Transport and did away with it's Atlanteans so his passengers could be packed in like sardines instead. I have a brother who lives in Devon and they had a car with D-NOD as it's registration letters as well and not surprisingly they named it Noddy. As for  parent fleet Devon General and Blue Admiral I suspect they had too many Noddy's to christen and probably called them something a little more rude. The Alexander Dash body on the Dennis Dart was well suited to those Stagecoach strips and they had a strong presence here as well for the were the new owners of the once magnificent Southdown.
Posted by christopher at 16:38