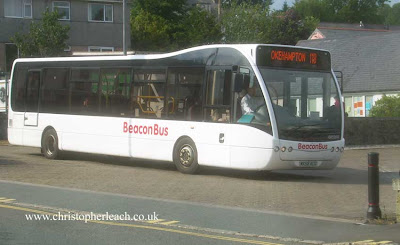 One of the former First Western National drivers who had moved to Devon and who was working from Tavistock told me one reason he enjoyed the job was the lovely little town and travelling through beautiful countryside. True Tavistock is on the edge of Dartmoor but as First cuts back more of it's rural network their buses will become more confined to the built-up areas as Independents take up the unprofitable tendered rural routes. Most of the Plymouth routes terminated at Tavistock but till recently the old hourly 86 Service went right on over the moor to serve Okehampton to the north. But now that very pretty section is operated by Beacon Bus who was using this new Optare bus in June, and with this another of their long routes cut the local First Bus drivers find themselves more and more confined to the usual more busy routes heading down into traffic-congested Plymouth.
Posted by christopher at 02:59