What do Liverpool and Berlin have in common? 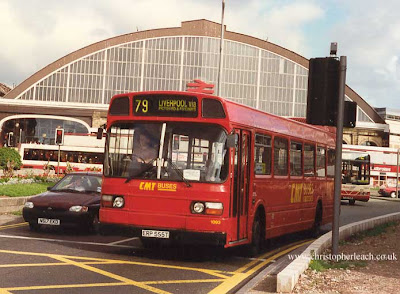 Well according to my brother they are the two cheapest cities to live in Western Europe or something like that. Once thing is certain though as in both of them with stretched budgets transport struggles to make ends meet. The traditional operator BVG in Berlin of course has a monopoly whereas with deregulation and Privatisation the elderly fleet of mostly former Liverpool Atlanteans had to see off a multitude of have a go independents. Some didn't last long but others prospered and CMT built up a large fleet of about one-hundred and mostly well presented second-hand National buses like this. Liverpool's fine Lime Street Station with it's elegant roof-line like a rainbow is still there of course but CMT who had merged with GTL gave Stagecoach a much desired foothold in this Arriva dominated city. As one might expect with Stagecoach, had this elderly bus still been in service at the time of the takeover it would have been quickly replaced. However it would not have looked out of place in Stagecoach colours as during it's rapid expansion in the Eighties and Nineties it had gobbled up United Counties including Wellingborough Garage who had ran it as No.555.
Posted by christopher at 08:37