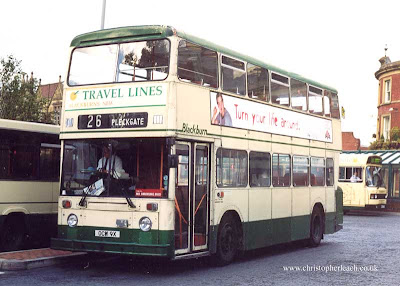 Darwen had a small fleet of red and cream buses but in the Seventies amid fears of being swallowed up into Greater Manchester PTE it decided to merge with it's much bigger neighbour Blackburn just up the road. Sadly in Lancashire of the twenty-seven Municipals to be found in the Sixties only two remain, Blackpool which merged with Lytham St. Annes and Rossendale which had been Rawtenstall before it took nearby Haslington under it's wing in the Sixties. There are another two survivor's of course, Halton (formerley Widnes) and Warrington but following boundary changes in the Seventies they are now in Cheshire.
Posted by christopher at 15:47