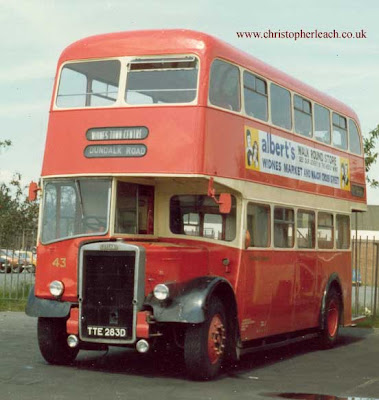 A couple of years ago I was celebrating Halton's last survivors from a long history of Leylands with some views that also included a pair of Lynx buses that had just made it. Even though on a previous occasion and probably about 1980 it didn't seem so long since I was photographing what were Halton the former Widnes Corporation's last double-deckers. Delivered in 1966 East-Lancs bodied Leyland PD2 No.43 hadn't lost a front ventilator following accident damage as it's was an amusing bemusing quirk of this town to specify this oddity. Maybe with the stink from the local chemical industry along the Mersey one opening window was probably considered more than enough to bear.
Posted by christopher at 02:32