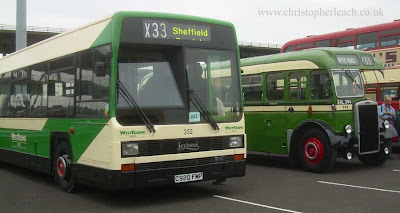 At Meadowhall in Sheffield last year many years separate these two Leylands in West Riding's colours a Leyland Tiger from the early Fifties and a former Lynx demonstrator of 1985. This Wakefield operator before selling out to the BTC to become part of the NBC in the late Sixties had the distinction of being Britain's largest Independent with 438 buses (1963). Naturally these was another large one to compete in rival Lancashire as Lancashire United based at Atherton near Wigan was Number-Two with 416. Of course as the buses might suggest these were bus companies run by a committee and not your average family business. West Riding is no more as like most of our bus heritage Caldaire who owned it was swallowed up by the big bus groups, in instance Arriva which is big up here.
Posted by christopher at 23:13