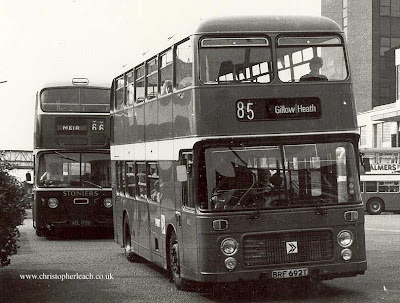 The sudden changes in the early Seventies with the NBC making it's mark and the PTE absorbing the local Corporations into one did not effect the Independents to the same degree and even though all those fine liveries like Standerwick, Royal Blue and the like got whitewashed over, we could still enjoy untarnished the likes of Yelloway and Premier Travel etc. Fortunately we still had the private bus operator's too like Barton and Berresford but we lost so many fine proud municipals to the PTE's. It was all so depressing I stopped taking photography between 1971 and 1979 and it was only perhaps Ray Stenning's inspirational 'National Bus Company Album' and then the need to go out there and get the last of the half-cabs, BMMO's etc that brought me back. I'm glad I did as I took so many b&w views before turning to colour for what was the colourful Indian Summer of Deregulation before even landmarks too started to disappear so quickly and for ever. Now Rotherham is no different to Stoke in bus terms. In 1979 I continued using my old Voitlander Vito2 Camera for a while but as you can see it started scratching the negatives badly and I had to get a new one. Here a former Bournemouth Atlantean of Stonier and a part of Berresford's follows a very typical NBC ECW bodied Bristol VR of PMT out of Hanley Bus Station.
Posted by christopher at 00:09