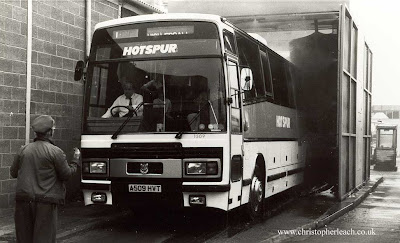 When I was a youngster I remember travelling on the 104 from Birmingham through Sutton Coldfield with Johnny Bird on a BMMO S17 and changing the gears as we went along. Later after Harper brothers was taken over he moved to Cannock Garage and before he became very ill I enjoyed an excursion he helped to arrange just at the time Midland Red North had abandoned it's coaching activities at Shrewsbury due to irregularities which is why now spare local branded Hotspur Leyland Tiger 1509 was available for our long trip to Ramsgate where it was seen being guided through the wash at the East Kent 'Thanet Garage'.
Posted by christopher at 15:41