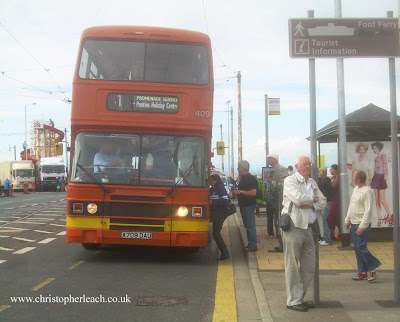 Blackpool transport bought a number of standard NBC ECW bodied Leyland Olympian buses from Trent in the Nineties. This Summer they were still going strong despite being twenty-six-years-old and No.409 was pictured on the Sea Front at Fleetwood. Even though Blackpool also buys new buses regularly it has never thrown out sound vehicles because of their age alone and obviously the operation has a hand-on feel rather than being left to distant managers and the whims of accountants. With poor design issues when new these buses were not greatly loved but no doubt they have become more highly valued because of their comparative simplicity and not forgetting the legendary frugal and reliable Gardner engines that has also kep't the similar aged West Midlands MCW Metrobuses going.
Posted by christopher at 07:06