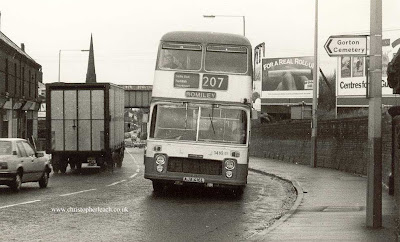 One of the saddest things the National Bus Company did was break up the charismatic North Western Road Car Company. With 55o vehicles it operated across much of pleasant and affluent green Cheshire and also more significantly the even less remunerative wilds of the Derbyshire Peak District. So when the cream of it's empire within the new Greater Manchester SELNEC PTA area was taken over including it's base at Stockport by the centralising Authority it was no longer a viable stand-up entity. So it's services and fleet was shared between NBC's Crosville, Trent and like this entire batch of still to be delivered ECW bodied Bristol VR's to SELNEC. Bound for Stockport No.1416 was to have been North Western No. 416 the NBC bringing a new type to the fleet as the Daimler Fleetline had been favoured under former owner the BET Group. However it did bring an attractive new type to the SELNEC fleet instead and the clean bus in it's orange and white livery seemed to brighten things up as it passed through the rather depressing area of Gorton in East Manchester one horrible afternoon in the Eighties.
Posted by christopher at 15:57