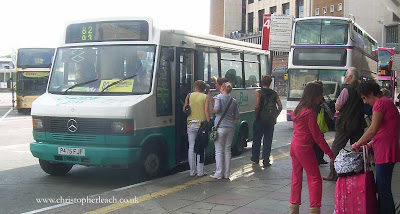 The major groups aggressively competed to gain both territory and market share. Today they are more concerned with the latter and in certain areas of the country like the rural and seasonal South West areas of Devon and Cornwall a sort of buffer zone has appeared where the small Independents have won the lonely tendered routes the big boys can't be bothered with. Once Moretonhampsted could boast a local network and a six bus garage in the old Devon General days but I expect one only sees it's successor Stagecoach regularly coming in from Exeter. Obviously Devon County Council feels the need to support some degree of service and a Mercedes Minibus of the appropriately names Country Bus picks up a reasonable load in Plymouth.
Posted by christopher at 07:37