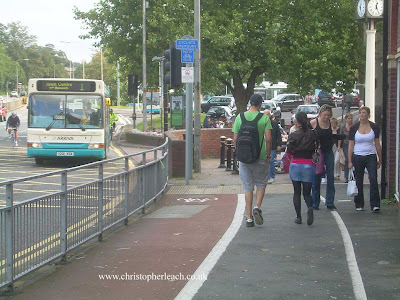 As you can see despite the provision of cycle paths most cyclists still ride on the busy roads. Still it's not surprising as even though they seem to be everywhere they don't seem to go very far especially in the town centre unless one ends up cycling against the traffic or getting from one to the next via the pavement. It's funny though as it's only when we look at a photograph like this that we start to appreciate how green and pleasant central areas of our towns have become. Plaxton Pointer bodied Dennis Darts are pretty typical of the current Stafford Arriva fleet including a number of short ones like this.
Posted by christopher at 02:29