Couldn't you get a little closer? 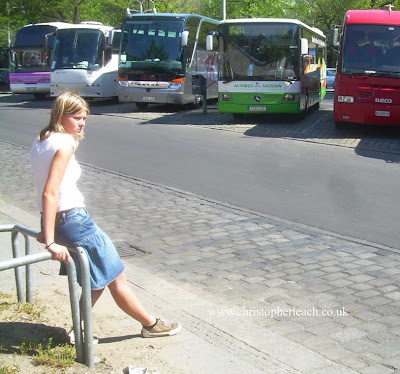 It's terrible isn't it the way these lazy looking girls get in the way when I'm taking photographs. In a way though today it seems coaches are becoming more interesting than local buses as the old types quickly disappear being replaced by even more standardised modern types. With the passage of time coaches seem to be getting more modern as well of course but because some travel great distances that in itself it is some reason to show an interest. Here where many of the tourist and visiting coaches stop outside The Zoo in Berlin were found quite different machines lurking behind that girl who so annoyingly got in the way, or rather as you have probably guessed given me an excuse to take this panorama shot. Firstly an Italian bodied Iveco from Italy, then next to it is a Mercedes-Benz carrying the rather less common than the Citaro bus, the attractive dual-purpose Integro. Setra seem to have lost their sleek looks of the past as can be seen on this more wedge-shaped high-liner type, perhaps from Sweden with a similar but more messy profile to be found on the Neoplan at the far end. The other coach of course from Holland is the Bova Futura, a classic torpedo-like design that seems to go on and on in a timeless way just like those pretty girls whom I like to sneak into my pictures. I'm sure you don't mind.
Posted by christopher at 06:52

Great shot. Of course we forgive you for not having asked the girl to move ;)

Sorry I haven't commented for some time as I was rather busy. I have been checking your photoblog from time to time though and don't think I've missed any.

Keep up the good work.

Thanks Andrew, it's always good to know my regulars are still busy taking a look. It gets a bit lonely sitting in front of a comp.