Plymouth: Where have all the coaches gone? 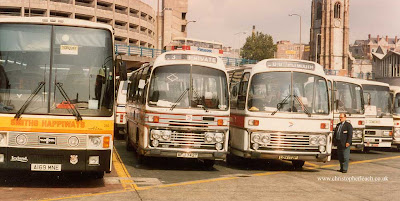 In the Eighties and Nineties Plymouth Bretonside Bus Station used to be heaving with coaches. Some belonged to nearby Independents with a mixed collection of older vehicles on regular shopping excursions from the small towns of North Devon and Cornwall, or were newer and visiting with people from further afield or just out for a day trip from a Torbay Hotel which of course included a boat trip to the Naval Dockyard from The Hoe. Others like the two on the right were usually out and about on the longer type of bus journeys but today it seems they too were enjoying an excursion from Torbay. Western National greatly favoured the 7ft 6in Bristol LH in bus and coach form as it was ideal for the narrow roads in it's area and one of these makes an interesting contrast with a similar but full sized Leyland Leopard also bodied by Plaxton. The NBC had quickly merged the much loved BET Group Devon General with it's huge neighbour BTC State Owned Southern and Western National but fortunately chose to keep them separate with the DG buses retaining a red instead of green identity. The Leopard wears a more conventional NBC dual-purpose livery whilst the neat little Bristol carries the very attractive venetian-blind effect stripy scheme that using many different variations started the slow return to more individualistic colour schemes prior to the return to the private sector. At this time it was a rather depressing time for enthusiasts as minibuses were taking over our towns and we tended to overlook the more positive aspects as the NBC relaxed it's stance and let in some much needed innovation.
Posted by christopher at 06:33