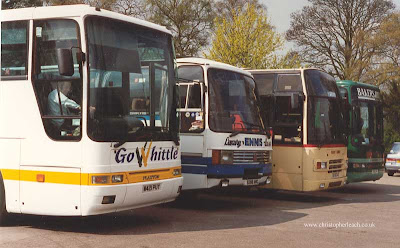 The Shugborough Estate on the edge of Cannock Chase and former home to Photographer and Cousin of the Queen, Lord Lichfield before he died is quite close to where I live. As you can see even a short excursion for other reasons is still a good excuse to take a camera. It was at this time of year too as you can see from the trees behind and I went with a girlfriend to buy some shrubs. We did buy one or two things but like everything I bought that year they all quickly died, so it was good that at least I took these photos of three Plaxton bodied coaches and a Duple Lasar bodied Bedford. Still in East Kent colours but now part of Stagecoach this coach had come a long way probably around two-hundred-miles but I expect the others were all reasonably local. The Whittle company from Highley in Shropshire is now also a part of one of the main bus groups, this time everyone's favourite East Yorkshire who retains it as a separate unit. A similar Volvo coach at the far end belonged to Bakers of Biddulph who are still going strong as an Independent albeit running them with more white than green in the livery these days..
Posted by christopher at 07:53