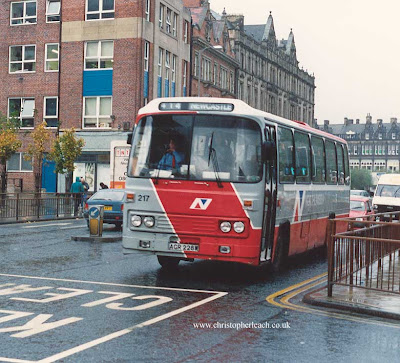 After the NBC was Privatised the split up and devolved companies had to find their image. Some just modified their existing NBC livery slightly like City of Oxford, whilst others tried to return to the old days like Southdown with it's tasteful apple-green and cream. Others though went for a bold approach which didn't always look good especially on certain types. It certainly did nothing for this Willowbrook bodied Leyland Leopard tackling the wet roads in Newcastle during a summer rain storm way back in 1989.
Posted by christopher at 07:07