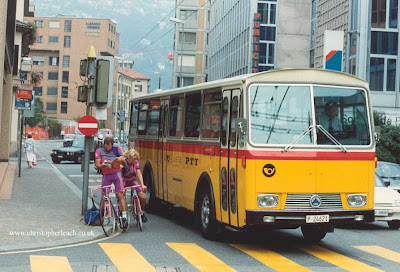 At PTT Lugano they always seemed to have a good number of elderly buses that normally would have been withdrawn and sold. I think this was partly due to the number of schools contracts but also to the mild frost free climate meaning that no salt on the roads led to far less corrosion. I don't suppose it made a huge difference to these well prepared Saurer DUK buses but Setras were notiously bad in that respect. As you can see P24621 about the enter the covered bus station in 1990 when eighteen years old yet still looked as good as new like most post buses. You could tell it was a good age though as the Swiss did away with these large front number plates for something a lot smaller in about 1975 as can be seen on the other traffic.
Posted by christopher at 01:56

Lugano is a truly amazing place. Maybe the city buses have grown boring since the trolleybuses closed and it seems to be all Citaros these days which sadly makes it feel somehow interchangeable with other small town locations.

I'm not even sure what types the Postautos are in that area at present. But the scenic rides are definitely all still there and Lugano is still a place I enjoy visiting.

From what I understand many of the new Postautos are Citaro's. However Lugano tended to take mostly Setras in PTT days