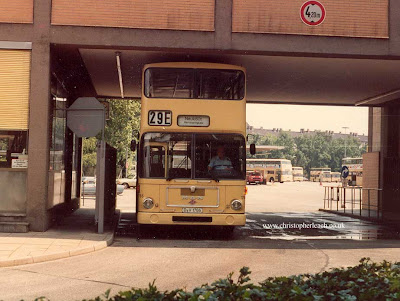 There are now only seven BVG bus garages in Berlin including two large ones in the former East Berlin. Cicero Str with an allocation in 1988 of 167 double-deckers and 42 single-decker buses was built in 1958 and tucked away is situated not that far off the famous Kurfirstendam so not surprisingly it has always worked routes that pass along the fashionable thoroughfare including the long 129 which is an interesting ride as it crosses the city starting from the leafy expensive suburb of Roseneck travelling down the Ku'damm and passing once famous landmarks like Checkpoint-Charlie and the Anhalter Bahnhof before going into the poor area of Kreuzberg and terminating at Hermannplatz in Neukolin another old working class district. This typical Wagon Union MAN double-decker of 1980 was about to do a peak period extra 29E which unusually it seemed was going the whole way. It is easy to tell which photos were taken after Reunification as they were either renumbered or had one-hundred added making this the 129 of today. In the background in the extensive outdoor parking area as well as more of these buses can be seen a Mercedes single-decker and my all time favourite Berlin Bus, those lovely atmospheric Bussings that plodded along making a whole series of interesting sounds including like a high-gas kettle with a whistle coming to the boil.
Posted by christopher at 04:45