Stafford: It's been a long Winter 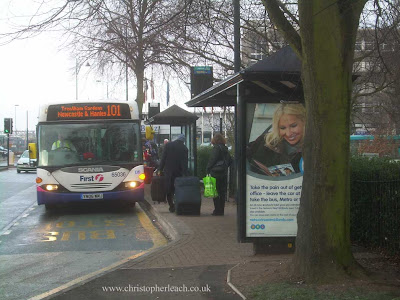 Yes because it started so early and at times was so cold it has seemed a particularly long winter in Britain this time. However despite the poor conditions it is still possible to take some interesting pictures like this First Group Scania loading at Stafford Station on the frequent service to Hanley. After Deregulation the First Group bought out the PMT (Potteries Motor Traction) who once before the Seventies had an extensive network of routes of largely rural routes to the north of the town plus a cross-town joint service with Midland Red using an Atlantean and even had a small seven bus garage here. Today it just comes into town with this the traditional main trunk service updated going via Newcastle instead of Soke and worked by eight of these rather impressive Swedish buses.
Posted by christopher at 15:26