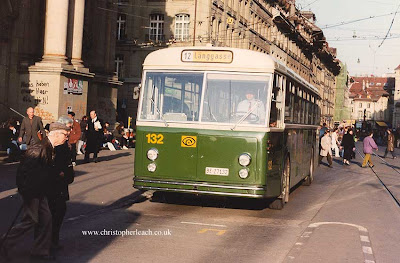 Once typical of the Swiss Capital's bus fleet, by the Nineties the at the start of the decade large numbers of survivors from this large batch of about sixty FBW's dating from between 1959-65 were usually only to be seen working in the morning and evening rush-hours. However when I first arrived in the city after a long absence since my schools days when I was here in 1964 I was so pleased to see that one was out working on a Saturday Afternoon to welcome me I immediately took a ride on No.140 to make a tape-recording as if to celebrate. That was 6th January 1990 and little over ten years on in the Spring of 2000 all the FBW motorbuses would be finished including the artics. Like the others No.132 still looked fine but albeit dated when caught in bright winter sunshine on it's way to Langgasse, which I imagine means long road in German.
Posted by christopher at 06:59