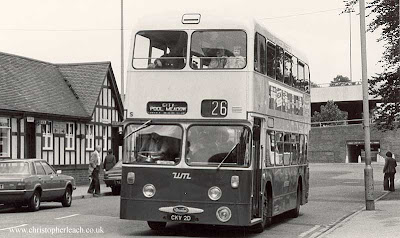 Not surprising as Daimler buses were built in the city Coventry Corporation ran little else really with the exception of with much public outcry a large batch of twenty-two Leyland Atlanteans for evaluation in 1964. Another twenty-two Fleetlines purchased at the same time, as one would expect won the day and many more followed but perhaps my favourites were these well rounded East Lancs bodied examples with deep windows which probably was one of the best designs for the type. Following the two types of Willowbrook bodied Leyland and Daimler of 1964-5, a new Number-One started a new series in 1966 and after absorption into the West Midlands PTA No.2 became 2Y as Coventry buses received this letter so they wouldn't be confused with 2N at Wolverhampton, 2L at Walsall and 2H at West Bromwich.
Posted by christopher at 07:44