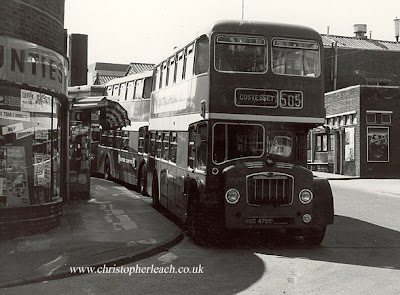 In 1982 as they neared the end of their days places like Wrexham and Chester were good places to photograph Bristol FS buses as Crosville still had them on the trunk service to Oswestry. For the longer front-entrance FLF two of the best places to see them were in Bristol and here at Norwich where Eastern Counties was still running smart FLF's and FS's on City Services too. On Good Friday the Norwich buses were all having a day of rest and even though they were parked outside the direction of the sun presented a problem. However I'm still pleased with this view of FLF 470 and even though we like to believe standards dropped in the NBC era just look at the well maintained bus station with it's information boards and Enquiry Office which welcomes with sparking windows. Unless the local authority step it is a far cry from what we usually expect to find today from the industry with everything boarded up, filthy or locked toilets and rubbish everywhere. Probably about the only thing that works is the CCTV cameras so someone can tell you to stop taking photographs.
Posted by christopher at 06:49