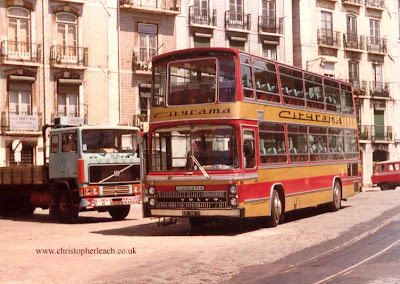 Until I stumbled on it again I had totally forgotten about once seeing this fabulous double-deck sightseeing coach in Lisbon. Also if I were the sort of person to make New-Year-Resolutions I might have decided to post more items in my so far neglected 'Rare Birds' blog category as I do have quite a lot of unusual stuff waiting patiently in my archive. Some rare buses are the stuff of legend like the FRM or the Midland Red D10's, but this gem is pure childhood fantasy as I'm sure I'm not the only schoolboy enthusiast who was weened on those eclectic books by Paul Hamlyn which amazed us with seemingly everything from tilting Routemasters on the Chiswick Skid-Pan to oxen dragging buses up the sides of Volcano's. They would have simply loved this one but all I really know is it is a Volvo with Portuguese Coachwork dating from about the end of the Sixties, also I'm sticking my neck out here but I've a feeling I read somewhere Cityrama ran it on the Paris Sightseeing Tour.
Posted by christopher at 07:59